Get the Healthy Recipe Book for FREE!

Locrio de Pollo Dominicano ( in other words Arroz con Pollo ) – is a traditional Dominican rice and chicken dish. This is one of the first dishes that I learned from my Dominican mother-in-law. I have to say, that we, Hungarians have only one traditional rice dish, the “Töltött káposzta”, Stuffed Cabbage with Rice and Ground beef. We are more like potato “fans”.

But when I got married to a Dominican family, personally, it changed. I don’t say that I don’t like anymore any good mashed potato, french fries, potato soup, or anything with potato. I love it! But rice got a “thing” for me. After my mother-in-law showed me all the tricks on how to make that rice dope, Dominican style, I realized the reason why I wasn’t a fan before. Well, let me just say, my rice was plain and tasteless next to this one. 🙂

I soak all the information, and thanks for my germ ( my mom is a chef in Romania ). I learned it fast. Well, after almost 3 years, I can say, I know how to make it. 🙂

From where is Locrio de Pollo Dominicano originated?

Locrio de Pollo is similar to the Pilaf and Paella, and it is said that origins from Valencia, Spain. (Hm, this can’t be an accident ????- who knows my family’ they know why I’m saying that ????). Puerto Ricans and other countries from South America have their style with Locrio de Pollo – they call it Arroz de Pollo -, but the ingredients for the Dominican style are to a most similar one with the original Spanish style.

If you want to try the original rice dishes – Pilaf and Paella – from where the Locrio de Pollo originated, down below click on the title, and you’re straight directed to the recipe. Locrio de Pollo is a perfect match with the Tostones. Easy and delicious side dish.

to your weekly newsletter 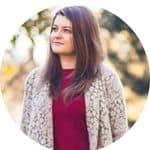 I'm a Hungarian Chef and Food Blogger. Creating recipes influenced by my Hungarian heritage and also baking goodies it just makes me happy. So excited you're here, let's cook something together!